The iPhone case that wasn't

A couple of weeks ago I got a nice new shiny iPhone 5. I absolutely love it, and what an improvement it is on my old 3gs! The only problem is I am absolutely terrified of scratching it. It's so shiny and new and I want to keep it that way, so up until Christmas I was carrying it around in a sock. Yes, quite literally a sock. Well that obviously wouldn't do, so I set about making myself a cute wintry case from a pattern in cross stitcher magazine. It feels more like a chore than relaxation though, as it's stitched on felt using waste canvas and it appears that me and waste canvas really don't get on! 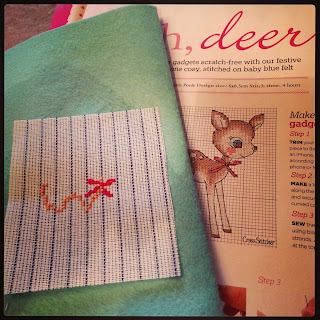 Anyway, my cross stitched case is progressing so slowly that just before christmas I decided to have a rummage around in my room looking for some suitable wool to crochet myself a case. It was all coming along nicely and choosing such chunky wool meant it crocheted up incredibly quickly in just one evening. I even got as far as choosing a button to keep my phone nice and safe. Thankyou to those of you on facebook and instagram that gave me your opinions vis a vis which button to pick by the way, it was much appreciated! 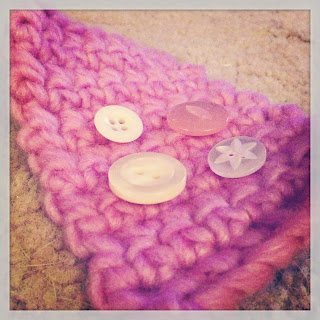 I checked the size before crocheting the sides together and it looked good, I was on a role! I crocheted it all together and then came to the horrible realisation about just how chunky my chunky crochet was. What's more it appeared to have grown sideways when I crocheted both sides together. Apologies for the poor quality photo, it's somewhat problematic to take a photo of your phone when your main camera is, well... your phone. 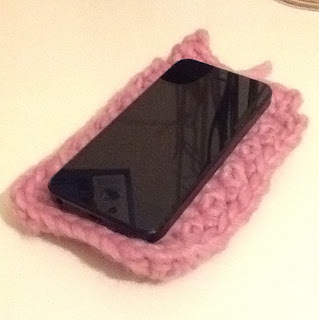 As you can see, it's not one of my more successful crochet projects! I'm undecided whether to frog the lot and make in ipad case instead or not. The wool was a bit splitty so might not take too well to being completely frogged, but it's nice and easy to work with, so we'll see. It's made in Sirdar Big Softie which I've since developed a bit of a soft spot for, as you may have seen on instagram, but I'm saving that reveal for another day.

Anyway, the failed case has been hidden in shame somewhere in my bedroom and I have since successfully made myself a new case which I'm off to photograph for you now. Until next time...