We've had a couple of bananas which were past their best kicking round the kitchen for the last few days so I decided to put them out of their misery by making some kind of banana bread. There are loads of recipes on the BBC Good Food website but I went with the brazil & banana bread purely because it only required 2 bananas and that's all I had! 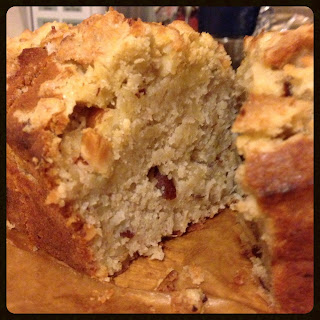 Slight misunderstanding with the method aside, I really liked this cake - it's yummy and the fact that it's banana means you can pretend it's healthy. The banana and oil also keeps it's nice and moist. However, next time I think I'll use fewer brazil nuts and perhaps slightly more cinnamon as it didn't really come through. I loved the crumble topping though, especially the hint of coconut, so I think I may be recycling that idea in other loaf cakes I make!

Overall a good solid recipe and a nice starting point to play around with and tailor to your own tastes. I will definitely be baking this again, albeit with a few alterations.