A Spot of Olympic Baking

Thursday saw the olympic torch making it's journey through Dorchester before heading to Weymouth to stop over night, so Southampton-Girl and I decided to go along and watch the torch as it passed through our little part of the country and then head back to mine, to be joined by Durham-Girl for a good old bake-off.

It was originally intended to be summery affair, with us stood at the side of the road in the sunshine waiting to see the torch before baking cakes and consuming them in the garden. In reality we got somewhat drenched (some more than others!) whilst watching the torchbearer paddle past through Poundbury. But we went, and we have the photos to prove it! 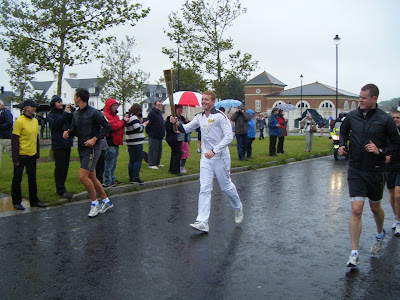 Thinking about it I suppose it's quite impressive when you stop to think that we're only 20 years old and we've lived through 3 decades, 2 milleniums and seen the Olympic torch in our home town. Not to mention the Queen's Diamond Jubilee. I wonder what other major events like that will occur in our lifetimes?

So, on the way back from our swim to see the torch we went to not one, but two convenience stores in search of ingredients, followed by a trip to the specialist cake decorating shop the Angel Cake Company up at Poundbury and then the obligatory stop off at the House of Dorchester factory shop to get some supplies to keep up our strength whilst baking. If you live in the area both the cake and chocolate shops are really worth a visit. This certainly wasn't the last time I'll be visiting either of them this summer!

We used the buttercream mountain recipe from Baking Magic to make the cupcakes. Normally when I'm baking on my own I tend to go for particular flavours like these Coffee Praline ones I made or the Spiced Carrot and Cardamon ones that I love making (both modified from Cupcake Heaven), but this time we decided that it was about the decorating - bright butter cream icing, sprinkles, the works! So much so that we even put sprinkles into the batter in the hope that the sponge would come out multicoloured as it does when you use sugar strands, but sadly they seem to have dissolved in the cooking process.

The sponge worked and tasted great and I'll definitely be using the recipe again as a good basic cupcake base. It's supposed to make 12, but we ended up with 19 cupcakes! Whether we used slightly smaller, cupcake cases, filled them with less batter or what I don't know, but it definitely seemed to work. I love the idea that this book tells you how to make the basic bases of all the cakes and biscuits and then states which base you need to use and in what quantities for each recipe. It's such a great idea and saves a lot of repetition, plus I think it encourages you to experiment with mixing and matching ideas, flavours and decoration ideas a bit more as well.

Sadly the first batch of butter cream we made following the recipe didnt seem to work quite as well. Maybe it was because we used a particular brand of butter rather than bog-standard unsalted butter or maybe it's because we were lazy and decided to use a blender rather than beating it by hand. Either way it didn't look right and it didn't taste right, so we ditched it and ventured out again to get mre supplies to make a second batch, this time working by look and feel rather than following a recipe and I'm very happy to tell you that it worked!

We decided to split the buttercream to make 5 different coloured toppings, but Durham-Girls's attempt at making purple icing using blue and red food colouring went a little awry, so we ended up ditching that one. Our combined efforts at making pink or even red butter cream using red food colouring eventually turned out a rather nice shade of orange instead (don't ask me what happened there!).

So here we are, the finished articles. Aren't they pretty? 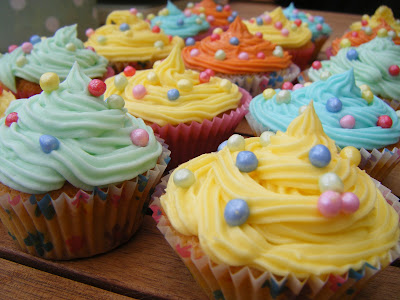 Of course the eagle-eyed among you may have noticed that there are only 15 cakes here - we decided to make the ones that should have had the failed purple icing look somewhat special with the leftovers... 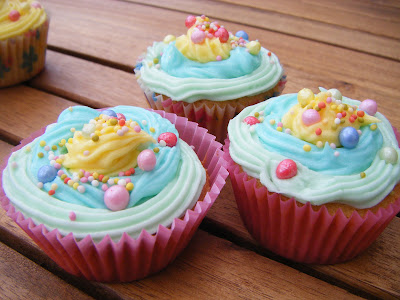 And of course one poor cupcake had to be consumed pretty much as soon as it came out of the oven. You know, just to make sure it wasn't poisonous. We take quality control very seriously here ;)

Of course the whole decorating experience would not have been possible had it not been for this impulse purchase up at Angel Cakes yesterday. We only went in for sprinkles, but I just could not resist this piping gun. It's easily the best £8-something I've spend in a long time and it was so eay to use! 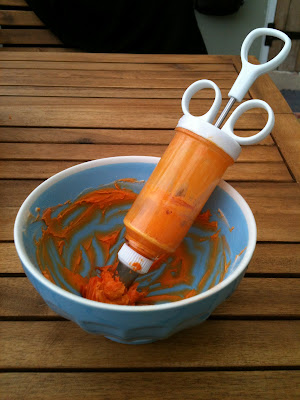 No more plain shiny or spread on icing for me! Next time I think we're planning our first foray into edible glitter, or maybe something chocolately? I hope it's not too long before we repeat the experience. 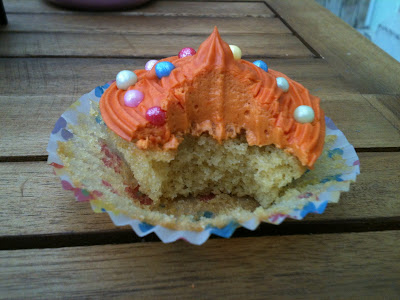