Hoist up the bunting

You may not have heard, but you know there's this little event coming up very soon in the UK. As in starting in the next few days. Anyone heard of it? I mean there's been so little hype about it, seeming as how everything is running completely as planned, under budget and ahead of schedule.

Anyway, apparently there's going to be a little bit of sailing going on down the road at Weymouth and Portland Sailing Academy, which despite the inevitable swamp of people that will descend on our part of the country soon will hopefully be a nice boost for the area. Already the seafront has been smartened up with a lick of paint, the pavements have been relayed and widened and little cafes and mini attractions have started popping up all over the place.

Weymouth already seemed to have it's fair share of bunting following the Diamond Jubilee, but when we went down to do a bit of shopping in the town centre on Thursday we also spotted this new Olympic bunting that's sprung up adorning some of the boats in the Harbour. 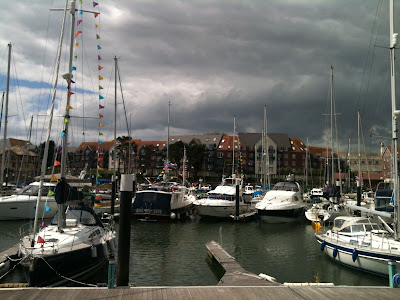 I wonder whether it's just those particular boat owners who decided to deck out their boats (sorry for the painful pun) in olympic bunting or whether it was a requirement to match the sail type flags that have appeared lining the main roads and roundabouts. Either way it's a nice touch and I hope more boats put some up as we get closer to the start of the sailing. 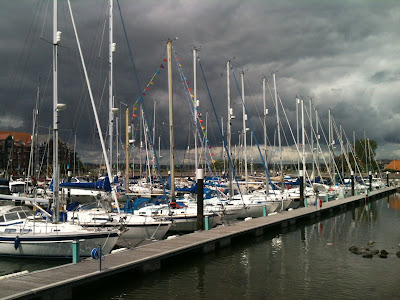 You have to admit, it's a pretty good view for a car park, isn't it? Just a pity the weather is looking a bit moody really, but fingers crossed that should be changing soon.