Just a quick post this morning to tell you about the little unexpected bit of making I got up to on Wednesday night. You know sometimes the projects that are the most fun are the ones that you weren't expecting - a real case of make do and mend!

So my house mate was invited out for her friends birthday after she finished her exams on Wednesday. However, the invite also came with the stipulation of being fancy dress - anything beginning with the letter L. I love this kind of fancy dress because you never know what everyone is going to come as and people generally get to pick something they want to dress up as, rather than potentially being forced into something they don't want to wear by the theme. The problem is, L is quite a difficult letter and the obvious ideas of 'lion' ad 'leopard' had already been shotgunned. So, what did that leave us with? Librarian? Luna Lovegood? With a couple of hours left she decided on a lemon - stick a yellow top on and we're sorted!

I had planned to pick up a bit of green felt to cut into a stalk, but forgot with all the excitement of buy one get one free at costa, so that plan failed a bit. So, with about an hour to go before she was supposed to leave I had a little brain wave involving some green wool and crochet hook and whilst my housemate was upstairs getting ready this little project was born. I hope you like it! 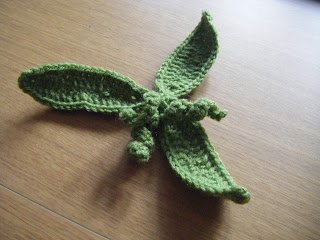 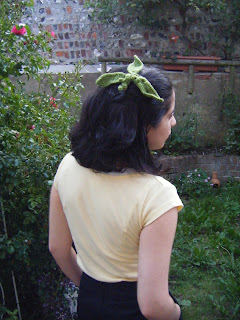 Email ThisBlogThis!Share to TwitterShare to FacebookShare to Pinterest
Labels: crochet